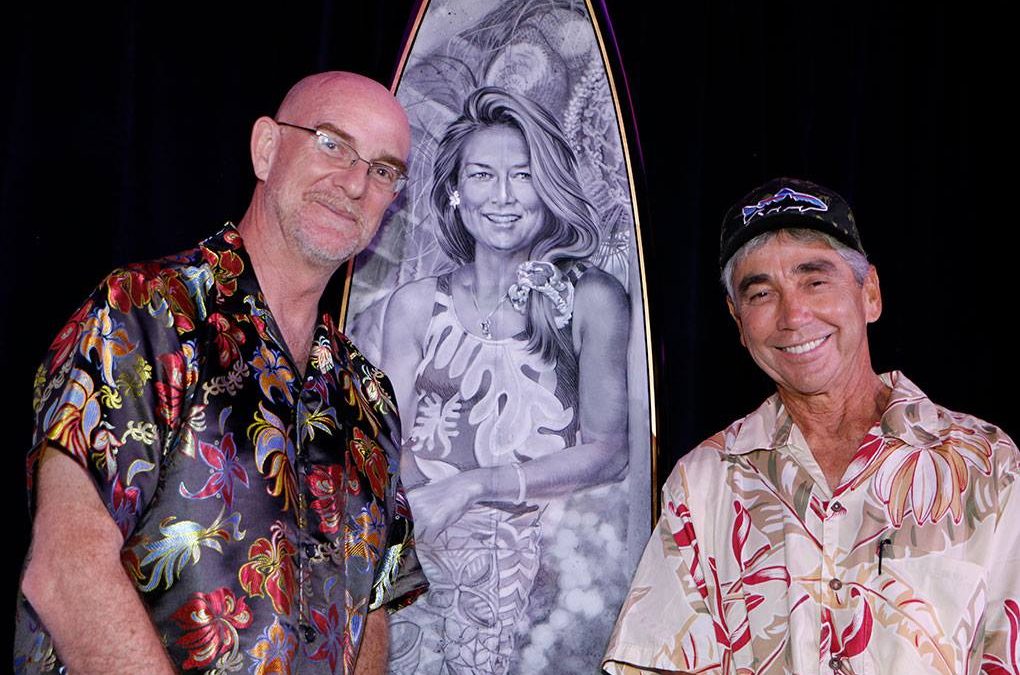 For the better part of 40 years Phil Roberts’ artwork has been capturing the spirit and the stoke of surfing. Starting with his famous Surfer magazine cover in 1982, he’s painted and illustrated his way into the sport’s artistic consciousness. Abundantly creative and good-nature, when the Surfing Heritage and Culture Center began planning its 2018 “Women Making Waves” Ohana Gala he was generous enough to donate his time and still to the cause. Responsible for illustrating the portraits of Joyce Hoffman, Rell Sunn, Lisa Andersen and Stephanie Gilmore, in his classic style, he delivered.

“The originals are completely hand done, even the one on the surfboard,” said Roberts when we caught up with him after the gala. “The board was multiple layers and all hand drawn. I’m super happy with the result. I had something in particular that I was going to do, but as I was working on it, the portrait wasn’t dictating me to go that way.”

Always challenging his talents, the Gerry Lopez-shaped Lightening Bolt pintail was adorned with an exquisite portrait of the late Sunn.

“The technique that I used to render that image on the board was something that I invented and I did it for the first time on that board,” continued Roberts. “I’ve never done that. I wanted to try and figure out how to develop something new, and I’m pretty stoked with how it turned out.”

The base structure of the drawing underneath was done with what’s called liquid pencil. It’s pencil graphite in a paste-liquid form and you can use it to paint. So I used all brushes and it’s all hand done with paintbrushes. Then I did a clear, matte acrylic spray coat over it to seal it. It’s just like pencil, it’ll smear and you can also erase it. Then I wanted to create a very smooth, soft even tone of greys for skin tone, and that was all done with charcoal powder. I was really gentle with that, using cotton balls and q-tips to apply it. I had to be delicate with the pencil that was underneath. I spray cleared that. And then I went in on top with color pencils for details. Normally those mediums don’t mix, but with the layers of clear I got them to mix. The overall finish is a spray finish that I do on all the Pipe Masters trophy boards.”

We were kind of scared to ask him how much time he dedicated to the project…after all, time is money.

“Gold leafing the bottom was a whole 12-hour day. I’d say it was about 60 hours for the board total,” he said. “The portraits are probably three or four hours apiece.”

As far as the inspiration for the images, Roberts admits that striking the right balance was a challenge.

“I wanted to give the portraits a sense of essence and get their personality into the painting and still make them look really beautiful. It’s a delicate dance,” he explained. “You can’t go over glamorous on the beauty. They’re strong, very impressive women. As competitive athletes, they’re dead serious and they’re nothing to mess with. You want to capture that in the portrait. But you also want to bring the personality and beauty into it. So that’s the balance I was playing with.”

The bidding for the board was eventually won by SHACC’s own Dick Metz and can be viewed as part of SHACC’s current “Women Making Waves” exhibit. – Jake Howard