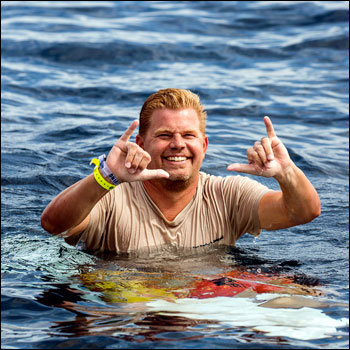 I was just going to teach English and coach water polo. That was my plan after college.

Growing up north of San Francisco, my surf life was well removed from the Orange County surf scene, but around 1998, I’d chased a lady friend to Seal Beach and ended up living across the street from the late, great Sean Collins. He gave me my first taste of the writing life. Cobbling the dawn patrol surf reports for Surfline.

Like the girl, the teaching and coaching thing quickly fell by the wayside the more I wrote.

A few years into the Surfline experience, I jumped ship and joined Surfer Magazine. Sam George gave me the opportunity to fumble my way through learning how to edit a surf mag. It was, as Sam would say, glorious. I miss mags…a lot.

Years spent with The Surfer’s Journal, ESPN, Stab Magazine, the WSL—you name it, for the last 20 years I’ve written about it. Roxy catalogs, social media for Nike, the written word has served me well. More than likely you’ve read my words in some way, shape or form.

It’s a trip. It forever strikes me as weird considering where I came from—Bodega Bay. It ain’t exactly the center of the surf universe. Dale Webster, the guy that’s surfed for too many days in a row to count, was our only local hero.

Yet, here I am. I’ve had the good fortune to be there when Kelly Slater won a world title or two. I’ve seen a couple Eddies go down. I was in Puerto Rico when Andy Irons, (who was a good friend) passed away in a Dallas airport hotel room. And this week, I’m in Lemoore writing about Kelly and his wave pool.

I’m not rattling off resume highlights to be a braggart or name drop. I absolutely hate writing about myself and think the abundance of first-person writing in the surf space is deplorable. It’s lazy. It misses the point and fails to serve readers the information they’re after.

My grandma once told me that you should write what you know. That’s pretty much the best piece of writing advice I’ve ever gotten. All I’ve ever really known is surfing, and to be able to write about it for most of my professional life, I can’t imagine anything better. Which is good because I pretty much can’t do anything else.

To be able to have the good fortune to be able to help the Surfing Heritage and Culture Center preserve the history of this beautiful lifestyle and sport, it’s something I never imagined when I was a kid dodging sharks in the 48-degree water up north. The stories, the artifacts, the people, the whole experience, it’s an honor and a privilege to be able to be involved, even if it’s just writing a quick biography for the gala event or a description for an upcoming exhibit. I’m so lucky to have such opportunities.

Not to say teaching English and coaching water polo wouldn’t have been amazing ride. It certainly would have. But sometimes when you start a story you never quite know where it’s going to lead. — Jake Howard, September 2018