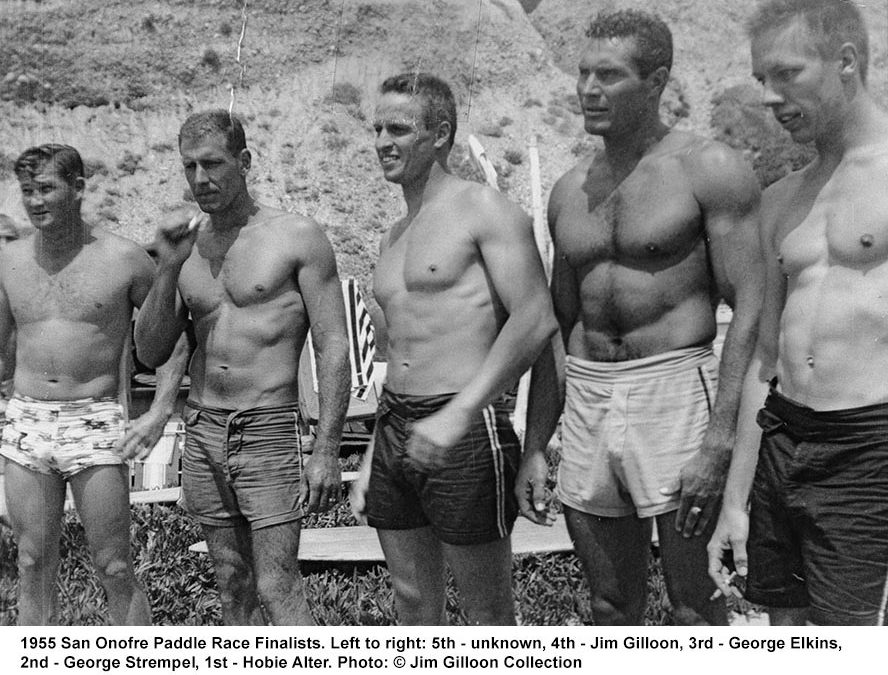 Longtime SHACC supporter, George Strempel passed away on Wednesday, September 5, he was 91 and is survived by his wife Jere. Here’s an article that Corky Carroll wrote about George last February:

Deep in the heart of Orange County surfing lore lives a classic dude by the name of George Strempel. This dude was, is, also known as “Gorgeous George,” due to what some from the female side have referred to as “Godlike good looks.”

There was a professional wrestler who went by that name, but this isn’t that guy. This is one of the real pioneers of modern surfing in our local waters and all over Southern California.

He started surfing at Seal Beach in 1942 on a huge wooden paddleboard that he made in wood shop class in high school. Making a paddleboard was a big undertaking. But not only did it provide a vehicle for him to learn to surf on, it also laid groundwork for his skills as a surfboard designer and shaper for many years to come.

After a stint in the Navy, Strempel got out in 1946 and started surfing and making redwood surfboards along with Rocky Freeman in Huntington Beach. He became a Huntington Beach State Park lifeguard while attending college and would wind up lifeguarding at many of the beaches from Huntington down to Doheny State Park in Dana Point.

After college he took off for Hawaii. Securing a great job working at the Moana Hotel in Waikiki Beach, he was able to surf every day and was one of the early surfers to experience the North Shore, as well as all of the other great surf spots on Oahu.

In 1953 Strempel returned to California and became a fireman for the city of Long Beach. He continued surfing and shaping boards, often hanging out with the A-list crew of the area at Blackie August’s house near 13th Street in Seal Beach. Blackie was a kingpin in Southern California surfing at that time and his place was sort of headquarters to all kinds of surfers who came through that area.

Included in that crew were Bruce Brown, who went on to surf movie fame with his epic hit “Endless Summer,” staring Blackie’s son Robert. Also part of that pack was the infamous Tim “the Iguana” Dorsey, who, as you might know if you have been reading me for very long, was a career chief of lifeguards in Seal Beach along with being one of the top surfers in the world at that time.

In 1958 Strempel went to work for Gordon Duane of Gordie Surfboards. Gordie had opened a surf shop under the pier in Huntington Beach. That was during the time when a surf shop was not only the place where they sold the boards; it was also the place where they made the boards. There was always a heavy resin smell in the air and you had to watch where you walked so you didn’t accidentally step in a patch of it on the floor. A surf shop was really a surf shop back then.

According to the Iguana, “Strempel was one of the greatest surfers in the area during his time.”

In 1960 Gordie’s shop burned down and Stremple partnered with Jack Haley, who had just won the first West Coast Surfing Championship at the Huntington Pier, to open Jack Haley Surfboards in Seal Beach. Haley, also known as the “Raven,” was a charismatic dude with flowing black hair and a flair for the slightly dramatic.

He is the Jack in Captain Jack’s restaurant in Sunset Beach, where almost all of the North County surfers have worked at one time or another. That was where I got my first paid gig playing music back in 1970. They sold Jack Haley Surfboards to Chuck Dent in 1962.

Strempel was inducted into the Surfing Walk of Fame in Huntington Beach in 2007 along with the “Boys of ’55,” the first Huntington Beach surf club. He still lives in Orange County and is in great shape. He swims a zillion miles a day, works out and according to his wife, Jerolyn is still “Gorgeous.”