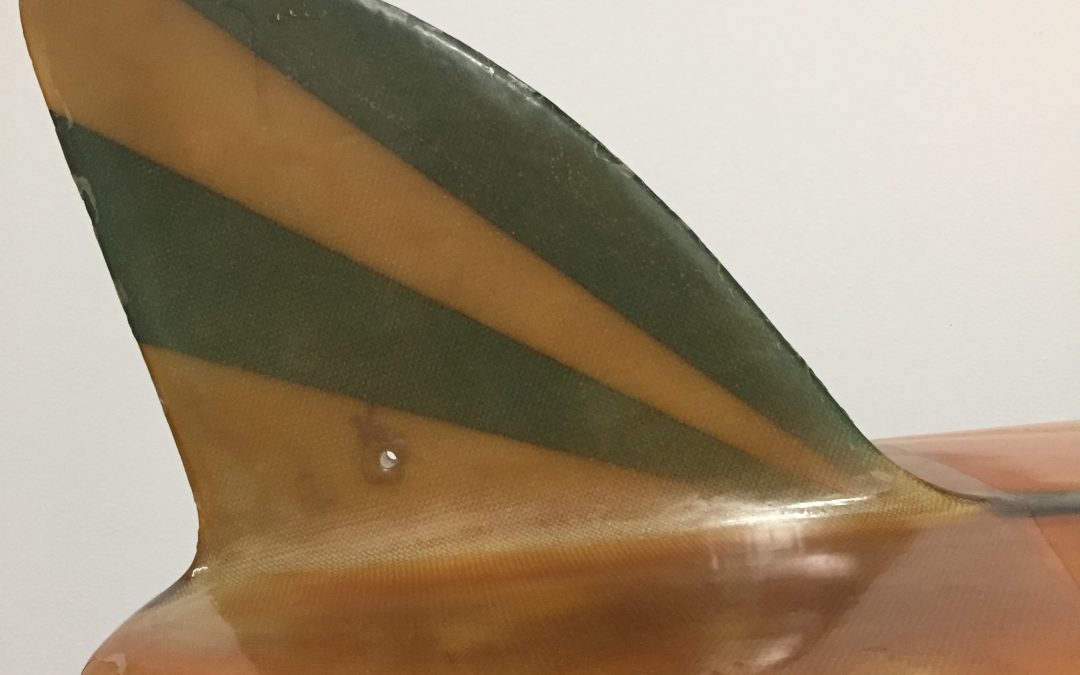 Tony Geria had never really considered collecting surfboards until one day 30 years ago when a beautiful Joe Quigg-shaped board randomly “landed in his lap.”

Geria had been riding shortboards exclusively up to that point, but during a long flat spell one summer he decided it was time to add some length to his quiver.

“There was a guy at work who said he had an old longboard he’d sell me. I asked him how much and he said $110,” explained Geria, who’s been an integral member of the Surfing Heritage team for the last decade or so.

“We didn’t really act on it, and a month or two later he ended up getting transferred to Chicago. So, he asked again if I wanted the board or not,” continued Geria. “It was a Tuesday, which is important because The Recycler came out on Thursday. Well, apparently, he put this board in The Recycler to try and sell it with all this other stuff, like a pool table and what not.” “When I finally got out there on Saturday to pick up the board in Placentia, he says, ‘Hey, I’m not trying to jack you on the price, but I’ve got this collector who saw the ad in The Recycler and Thursday night he offered me $200 sight unseen. Then he just called me this morning and offered me $300 sight unseen. I’m not trying to wheel and deal you or anything, but apparently this board’s worth some money.’ We still hadn’t even got it out of the rafters in his garage yet. So, he told me he’d get it down and show it to me, and he’d still sell it to me if I really liked it, but I had to promise I wouldn’t just turn around and sell it”

Together they got the board out of the garage and hosed the dust and dirt off. A 9’4” Quigg shape with a green, high-density stripe down the middle, a beautiful caramel patina, four stringers (two redwood and two balsa) and a very unique looking fin.

“It just popped. It was beautiful,” said Geria. “He ended up selling me the board for $110 bucks and I went straight to the Seal Beach river jetty and it was just beautiful. I ended up surfing it on both Saturday and Sunday. On Monday I got back to work, and the guy tracked me down and asked me how I liked the board. I told him I loved it. Then he offered me $300 for it. I told him I just didn’t want to part with it and that I was sorry, but I wanted to hang on to it.”

Riding the board at Doheny and San Onofre in the ensuing years, Geria reveled in the board’s magic. Eventually he brought it down to a Longboard Collector’s Club meet in Dana Point with the hopes of learning a little more about it. He was offered several thousand dollars for the board, but still refused to sell.

“Mike Marshall was there, and he used to shape with Quigg back in Newport. He explained how it had one of the very first high-density foam fins. It was an early fiberglass board, 1960 or so, and it had a high-density foam fin. It also had a deck patch on it for knee paddling. He says, ‘This thing is 100-percent original, you’ve got a real piece of history here.’ I was blown away. I knew it was a super bitchin’ board before that but hearing that from Mike Marshall and learning it was all original, it was like, ‘Wow!’”

Geria’s added more boards to his collection since then, but his first Quigg is still his favorite. And now it’s on display in SHACC’s new “Joe Quigg · Design Alternatives” exhibit. — Jake Howard, October 2018

(*The early hi-density foam fin was already drilled when Tony acquired it.)