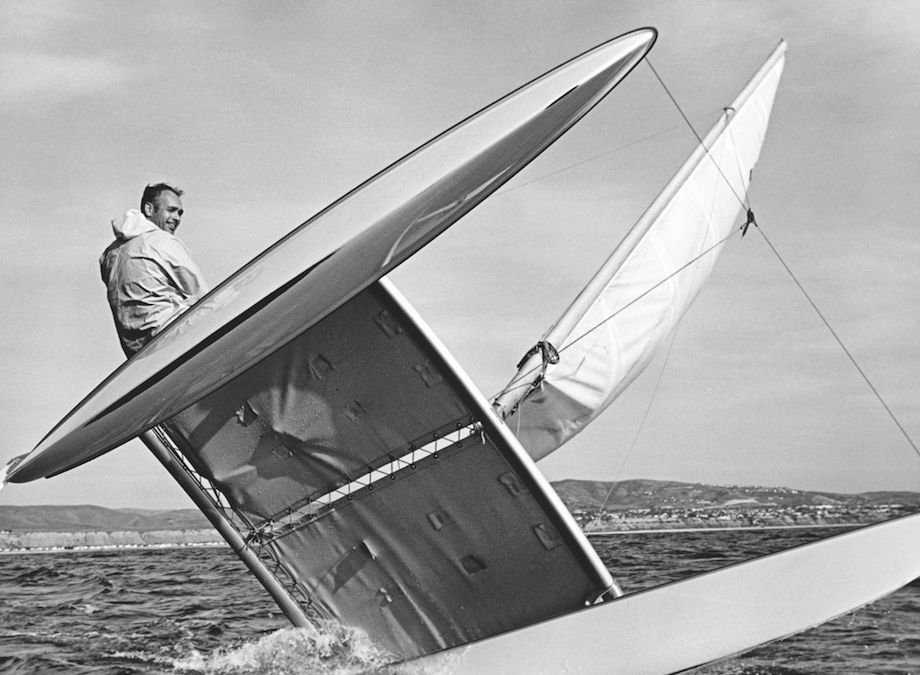 Officially launched to the public in 1968, this month, the Hobie Cat is 50 years old. On Saturday, October 27, Hobie and Dana Point are planning festivities to celebrate the milestone, including a regatta of more than 50 Hobie Cats from around the world in the Dana Point Harbor and a reception at the Hobie Surf Shop in town.

SHACC recently sat down with Wayne Shafer at his home on Beach Road in Capistrano Beach to talk about how he became Hobie Alter’s right-hand man in the development of the sailing craft.

“In the beginning it was just a group of guys down here, no organization or anything,” explained Wayne, who’s lived in the same beachfront home since 1953, when he first bought his slice of paradise for $5,500.

“One day I was down hanging out at Trestles with a few guys,” continued Wayne. “Phil [Edwards] was down there. I was introduced to this rather tall guy, you couldn’t forget his name, Grubby. We got acquainted on the beach. He seemed like a pretty fun guy. He was down at Hobie’s a lot glassing boards. He had this yellow truck with a camper on the back that he built. He’d sleep in it. He was like a homeless person. As I got to know him, one day he said, ‘Can I park down at your lot and sleep?’”

During this period, Wayne helped broker the sale of more Beach Road lots. Most of them went to his friends: Walter and Flippy Hoffman, Hobie Alter, Bruce Brown and a number of others.

“I got to build my own neighborhood on the beach with all my friends. We were basically living the surfer’s life, the dream, the whole thing,” said Wayne.

“Grubby had been in the Army and he talked about doing a sailing outrigger. Phil picked up on it. Basically, Phil has always seen himself as a sailor. While he’s known as a surfer, he likes to think of himself as a sailor first. That never got played up much, but he always kept this boat model, he brought it down here, and he still has it—a sloop. Anyhow, he started in Long Beach, I guess, and ended up in Oceanside. I first encountered him at San Onofre at the same time as Miki Dora. They were kids and they were surfing San Onofre. Of course, they were pointed out to me and they were both fantastic surfers. As you know, Miki Dora ended up at Malibu. That was his bait. And Phil was here.”

“When we lived together it was a lot of fun. We were just surfing and all that. Phil said one day, ‘I’m going to build that outrigger we always talk about at dinner.’ So, he did. That broadened our whole surfing life. Our surfing life was such that we’d get up early when it was still glassy and head to one of the spots if the swell was showing. But around 11:00 or 12:00 the westerlies start. The surf’s still good, but it’s blown out and not so attractive. So, when Phil built the outrigger we’d get through surfing in the morning, we’d come back up here, hoist the sail and continue. That broadened our whole day. We could now spend the whole day surfing and sailing.”

“Phil started it with the 16-foot outrigger that he built. Then guys would say, ‘If I buy this catamaran can I keep it on your beach?’ So, we had different catamarans here that different people bought. We had this cross section of catamarans, which was very good because it allowed us to try all these different boats, including the Pacific Cat, or the P-Cat. None of them worked the way we liked, but that was the state of the art at the time. The one that worked the best was Phil’s 16-foot outrigger canoe. It was simple. We could take it on and off the beach. And that’s what put the concept of the ’14’ in Hobie’s mind. He felt he needed to amplify off of that.”

“Catamarans give more options for going bigger or smaller and they’re very steady boats. And they’re quick and fast,” explains Wayne. “When he did the 14, basically, our concept was that we wanted to be able to take it on and off our beach here. Of course, Hobie had more in mind than just satisfying a few of us, though we were naturally part of the influence.”

“In his mind, I’m sure when he designed this boat that California was going to be a market, and it was, and we did very well here in California—I say ‘we’ because I feel like I was part of it—but Hobie looked beyond that.”

During its heyday in the late ‘60s and ‘70s, the Hobie Cat would bring sailing to the masses around the world. From California and Hawaii, to the East Coast, to inland lakes and rivers around the country, to further afield in international waters. For awhile it seemed that everyone was “surfing their sailboat,” as Bruce Brown famously said in “The Endless Summer.”