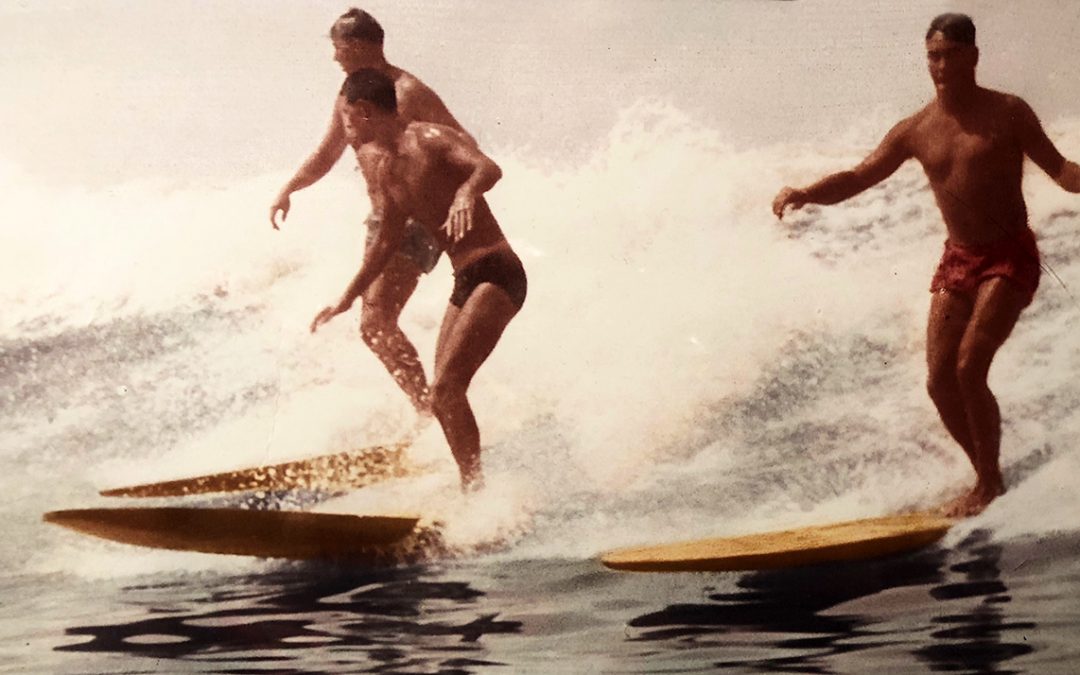 Born in 1924, Bob Insinger landed in La Jolla in 1929 when his mother and step-father built the first home above the bay north of Bird Rock. By 1937, Insinger had found his way into the ocean and entrenched himself as one of a handful of La Jolla surfers. Riding 100-pound redwood shooters, they frequented Windansea, the Bird Rock reefs and Blacks Beach.

“There were only a handful of La Jolla surfers in the late 1930s. That small group called themselves ‘The Mates’ and were a tight bunch. Windansea was the first, and pretty much only, surf spot in his early surf days,” recalled his son John Insinger, who along with his brother Rob helped found the Surfing Heritage and Culture Center. “Dad was pretty sure that he and Linville were the first to ever surf what is now ‘North Bird’ which they named ‘The Freaks.’  Dad’s house overlooked that break, the breaks at Bird Rock and the in the cove between, so it was close and easy. Surfing was the easiest thing for a kid in that situation to do. He said that most other surfers at that time didn’t surf The Freaks because it broke so far off the beach and the swim in to recover your board after a wipeout was a real workout in itself.”

“All I know about their early boards was that they were 10’ to 12’, all redwood, no skeg, and usually required dragging a foot to turn,” continued John.

When it came time to serve his country in World War II, Bob Insinger joined the Coast Guard and shipped out overseas. Participating in close-in beach rescue at Omaha Beach on D-Day, as well as French river patrols, his years of experience in the ocean saved the lives of a number of wounded soldiers.

“At Omaha Beach, on a very small Coast Guard boat, he was the go-to guy to help get injured troops out of the water,” described John. “His experience reading and predicting the waves was a big help to the captain and helmsman to get right in close to the beach despite being under fire.”

“A few weeks later on a Seine river patrol, his captain heard about a barge that had sunk in about 20’ of water with a couple cases of fancy French liquor on board. They found the location, but neither the captain or any of the other guys had the ability or experience to dive for it. He volunteered dove down a couple times and retrieved both cases. His captain became a hero for sharing the booty with all the officers in the area. Dad was rewarded with two bottles for his efforts, one for his crewmates, and one for himself. Without his waterman skills, it would have been just another dry day in the combat zone.”

After completing his service, Bob again took to the ocean, working as a commercial albacore and tuna fisherman. In 1956, he landed in Waikiki and fell in love with surfing all over again.

“Getting on a balsa board with a skeg in 1956 in Hawaii got him stoked all over again. In the early ’60s we lived in Hawaii for four winter months and used balsa boards. His commercial fishing season was all summer, which left his winters pretty free,” explained John. “I still vividly remember a day he and I surfed at Makaha with his old buddy Dick Linvillle.  Dad finished a great ride on a 10- to 12-foot wave, pulled out totally stoked, and proclaimed, ‘That was the best wave I’ve had in 20 years!’”

Befriending Rabbit Kekai, Jim Blears and other Waikiki beach boys, Bob reconnected with Woody Brown and Dick Linville. He continued surfing into the late 60s in La Jolla and remained an avid bodysurfer into his 70s.

“In his late 50s he gave up the board, but continued bodysurfing a lot. When he was a teenager his nickname was ‘Eel’ because he was skinny, tan and slithered down and through the waves so well. He was a very renown bodysurfer in the early days.”

Bob Insinger passed away in La Jolla in 2005. His ashes were returned to the sea outside the North Bird reef on Memorial Day 2005. The circle remains unbroken as Bob’s grandchildren and great-grandchildren continue to surf and share the stoke.