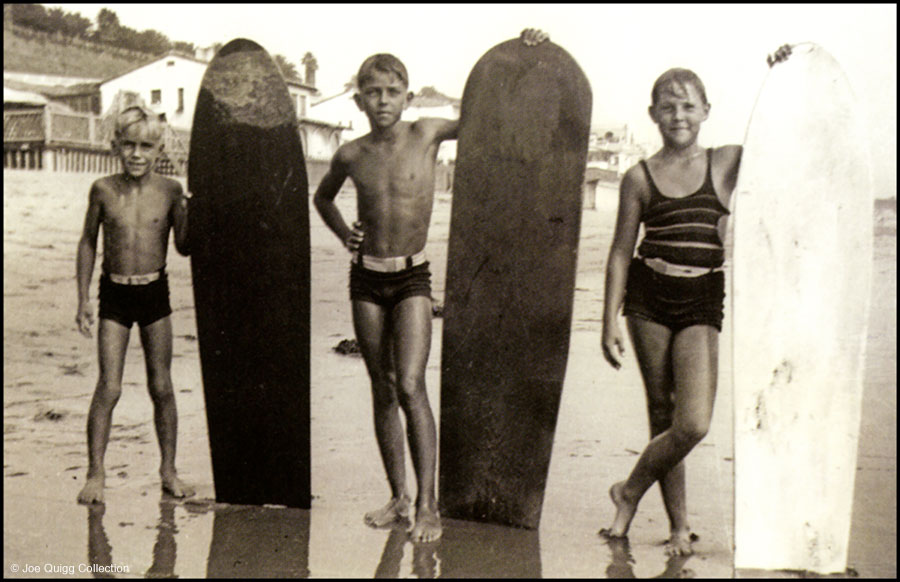 Born in Los Angeles in 1925, Joe Quigg ranks among one of the most important surfers and surfboard builders of the modern era.

Growing up in Santa Monica, he first took to the water when he was only four years old, building himself a crude billboard. By the time he was 13 years old he had made his first redwood board, complete with a preliminary attempt at creating nose and tail rocker. Years later, Quigg would say that his early experiments with rocker was his greatest contribution to surfboard design and performance.

“When I was 6 and 7 years old, I watched Peterson ride at the Santa Monica pier. He lifeguarded there and jumped in from the pier. He was just magic to me—so easy, so talented, and such a great athlete,” recalled Quigg in a 1998 Surfer’s Journal interview with Steve Pezman. “Lorrin Harrison would come up to see Peterson. He was a little wilder in his mannerisms and his personality—the way he surfed. He’d wave and jump and tear all around. When he was young he was quite a wild guy. Peterson was a better surfer, but he didn’t try to be wild like that. I thought Gard Chapin was the living end. When I started going to San Onofre, Hermosa, and Palos Verdes, I’d see him there and he would come up to Malibu and just run circles around everyone.”

During World War II, Quigg spent four years in the Navy, eventually returning to Santa Monica in 1947. It’s during this time after the war that Quigg began focusing more of his time around Malibu and designing boards with the likes of Bob Simmons and Matt Kivlin.

In ’47, Quigg crafted an experimental balsa-redwood hybrid for Darrylin Zanuck, daughter of Hollywood mogul Darryl Zanuck. Thinner and lighter than any other boards of the era, the 25-pound “Darrylin” model became the precursor to the Malibu chip. It’s during this time that Quigg and Simmons also began to develop the first polyurethane foam-core boards, an all-fiberglass fin, and a narrow-base raked-back fin. He also began to develop the first pintails, designed to handle better in bigger surf.

Quigg opened a production-retail surfboard shop in Santa Monica in 1950, followed by a shop in Honolulu in 1953, after he relocating to Oahu. He moved his shop to Newport Beach from 1959 to 1969 before returning back to Hawaii.

Settled in the Islands, Quigg continued to design and built aquatic craft of all types, including boats, canoes. He eventually retired from full-time production in 1987. —Jake Howard Quigg ·In the Beginning

”I was born in 1925. We moved to Santa Monica when I was about three. My mother loved to swim so she began taking me down to the beach, and I started making these little boats and paipo boards in my father’s garage. my mother and my brother loved to go to the Del Mar Club in Santa Monica. So I’d go scampering out there with my little paipo. I was only 3 or 4 years old. I hadn’t learned to swim yet, so I’d go sliding in the whitewater. That was in 1928 or 1929. I’d watch the lifeguards and surf guys that hung out there.” Quigg ·On Growing Up

”In high school I palled around with Dave Sykes who lived at Malibu right next to this house that my brother Jack, Ed Fearon, and Don James rented. Sykes was the best surfer I had seen at that time because he lived there and surfed all day, every day. He could just glide and glide. After this, he went in the merchant marine [during the war] and came back bigger and heavier, all grown up. The same thing happened to Ricky Grigg when he went off to Stanford and came back. He was never the same again. You know how some child surfers are so rubbery? David Nuuhiwa was a classic, just wild as a kid. Then, 20 years later, of course, he was heavier set, still a good surfer, same as Ricky was still a good surfer, but [not the same].” Quigg ·On His Formative Years in Southern California

”San Onofre and Palos Verdes became the first well-known breaks. Hermosa and Manhattan got popular a bit later. Groups of guys would come and go. Years ago I was at this party, and an older guy brought out some Don James footage of Venice that showed Bud Browne jumping off Crystal Pier. He used to lifeguard there. A gang of paddleboard guys rode out there and they couldn’t ride very well. Then they tore the pier down. But there was a bathhouse and some rentals there. I remember a picture in a restaurant dated 1905 of people standing around with these boards. They’d wade out and [scoot in on them]…Everybody gives Simmons credit for inventing the light board when the pre-war Swastika boards were already balsa/redwood  laminates and showed a trend toward lightness. It’s too bad Zahn and Peterson are dead. Zahn idolized Peterson and would have dragged all that history out of him…the group of guys that hung out at State Beach and worked at the Bel-Air Bay Club were moving ahead, and they went through redwood and gave them up for boards they called ”Stinton Spinners” because they were so light—a very thin veneer of redwood over super-light balsa. See, both Peterson and Stinton were into making light boards…there was a paddleboard club right there and the paddleboards were mostly Blakes, but there were a couple of balsa-filled box boards too. Blake’s boards leaked and weighed a hundred pounds. They were the very worst! Peterson made much lighter plywood paddleboards. The lifeguards preferred them for rescues.” Quigg ·On the First Fiberglass Board

”Pete Peterson made the first fiberglass board. It was hollow. He pulled it off of one of his older wooden boards. I was in his shop a couple of weeks after he did that, and I noticed that the old wooden board had been glassed too. Pete made the all-glass board about a month before Simmons had gotten glass. Yep. Fact! There had been a New York boat show, and these boat people—salesmen, reps—had been to that show and seen the glass. A guy named Brant Goldsworthy brought Pete the cloth and resin. I don’t know the name of the guy who brought some to Simmons, but it came from that same boat show. See, since I was a young kid, I’d been searching for better paints and going around to marine stores trying to find waterproof glue. When I got out of the Navy, the plastics industry was billed as the big future thing. I thought I might want to get into plastics, so I was searching for materials like foam and glass.” ”I knew him quite well, hung out with him pretty much, and we surfed in the same area up there. I’d run into him a lot out surfing, and I’d go hang out at his shop. I would say this about him: For someone to be that devoted was inspiring to me—his rails, and foil, and the rest of his plan shape, other than for the real wide tails—the boards were essentially advanced. Simmons was reading the math books and reading the naval architecture books, and he was also hanging out with the new planing hull speedboat guys. He was trying to mix it all together in a high-speed board. Sometimes we’d sit up all night long talking board theory. I liked Simmons. He was a very inspiring guy. That’s what Simmons taught me. I got inspirational encouragement from Bob. He did contribute to my abilities, I suppose. We were going to build a catamaran together at one time—an adventure craft—then sail it around the world and go surfing.” Joe Quigg was a photographer during his stint in the Navy. Photo: Joe Quigg Collection

JOE QUIGG: ”Unfortunately, I didn’t have a good lens. I finally got a little 300mm that, for a Speed Graphic, isn’t much magnification. I studied at Art Center and was a Photographer’s Mate in the Navy during WWII. I made those images after the war. You know, I was there [at the beach] for so many years.” Quigg made a unique photo record of a time when the sport was being defined and the California coast explored and understood as a surf resource. His iconic shots of the gang at Malibu and San Onofre testify to this. — Steve Pezman ”I feel these three guys (Joe Quigg, Matt Kivlin and Tommy Zahn)were largely responsible for the first complete combination of good stuff. That first board I built for Zahn was lighter, had nice rails, and a blended rocker. He’d put up money [for us] to try stuff, like the first paddleboard, and the first rocker board. He had that ‘let’s go ahead and do it’ drive.

We learned to make an entire surfboard in a day. We could shape a board in the morning and we could get a board hot-coated well enough that we could go up to Malibu for the evening glass-off and try it out. Ideas were evolving that fast.

We went to Hawaii where Rabbit taught us how us how to ride. He was the best hot-dog rider, getting deliberately barreled, wave after wave, doing it on a shortboard when everyone else was just sort of going straight off.” ”Leonard Lieb, Dave Hieser, Makaha, ’49, with the first nose-rider type board (for Lieb). The front half was straight and flat, top and bottom, with the back half kicked up and rounded, with 11⁄2″ rocker in the back deck and rails. This is ’49, more than 15 years before they started inventing nose riders for Tom Morey’s contest [in 1965].” Photo: Joe Quigg Collection ”In lieu of a tow-in, Buzzy (Trent) ordered this semi paddleboard to get into those outside breaks. He would train at holding his breath longer. He was searching for a way to cope with monster waves. My board was half the weight of Buzzy’s board. I described it in my notes.

This is the board that I built for Buzzy that he called his ”Sabre Jet”… or his ”Elephant Gun,” the board that started people calling their big wave boards ”Guns.”

The board on the ground is one of my earliest hollow balsa boards. It was originally meant to be a workout paddleboard (wide tail), for the South Shore, but it was narrow enough (that) I could ride it in big waves—at Sunset and point break Makaha—12′ long (by) 20” wide (at) 19 pounds.” Joe’s notes on Buzzy Trent’s “Sabre Jet”” and the genesis of the term, “Elephant Gun.” ‘I didn’t invent pointed tails, more the combination of nice rails and nice rocker and low rails. I did make a very narrow tail for big waves. My dream was to ride a wave. I shot a picture on one of our 1947 trips, and I just went, ‘My God, look at that wave!’ I wanted to build a board for that. And that’s why I made the pintail.”

Part 2 can be viewed by clicking HERE