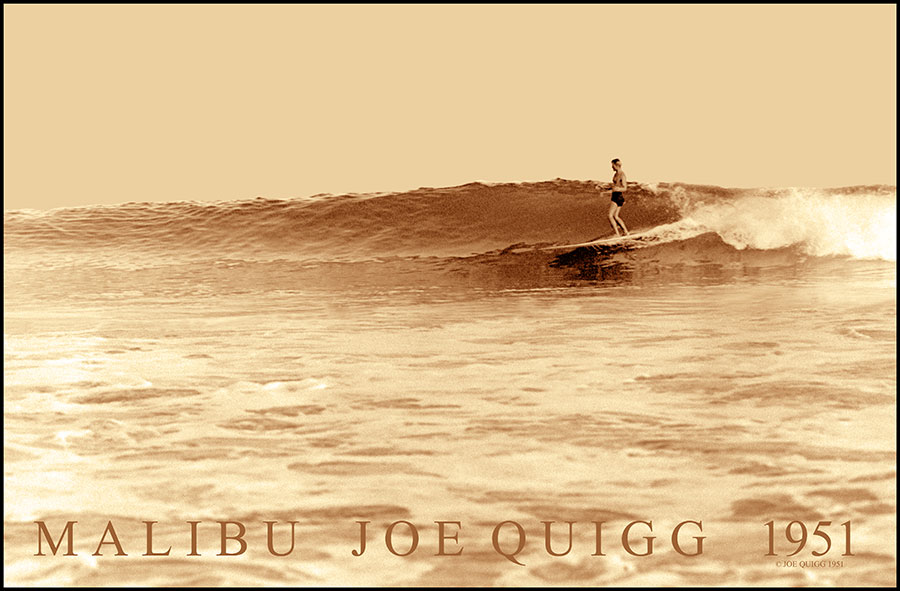 This is Part 2 of Joe Quigg: Design Alternatives ‘Robin Grigg, Aggie Quigg’s friend from Sunday school, used to go with Peter Lawford, the young Hollywood star (and relative of the Kennedy family) who lived just up the beach. Lawford adored the surfing crowd and often stuck around for the barbecues thrown by Quigg and his surfing buddy Matt Kivlin. They’d boil lobsters and break out cases of beer. Now and then Lawford brought one girl who just sat on the sand. “So one time we said, ‘God, Peter, who’s that gal?’ “She’s so white!” It was Marilyn Monroe. Quigg · Aggie and the Girls’ Boards

”That’s the [”Girlfriend”] board that Leslie (”Birdman” Williams) learned to turn on. Matt (Kivlin) brought all these girls up to Malibu, and she (Aggie) was one of them. And, as fate would have it—the birds and the bees, and so forth—Aggie and a whole bunch of the girls ordered boards from me, right when I was in the midst of glassing Simmons’ plywood boards. Those girls’ boards turned out half the weight of the plywood boards.” George Downing, Joe Quigg, and Mike ”Bones” Bright. 1954 Diamond Head paddleboard race, 1st through 3rd place finishers.  Joe kept at it and eventually built one that was 20 feet long, 16 inches wide and weighed 16 pounds. While testing various racing paddleboards, he says he got into shape and beat Downing (the fastest paddler at the time), in the 1956 Diamond Head race. Photo: Joe Quigg Collection ”The first was originally 24 feet long. I remodeled it down to 22 feet. It was so long and skinny it was impossible, so I was able to saw it down the middle, add a balsa center stick, and shorten the ends without damaging it. After I did that one—all hollow and strutted—I discovered that sheets of balsa wood bulkheads every foot worked better. It didn’t matter whether you cut holes in them or not. They were already so light that I could take all those sheets and put them on a scale and they didn’t even weigh a pound.” One of Joe’s proudest moments was in 1990 when the Kaoloa won the Molokai Hoe setting a record along the way. It was the last koa to do so. Photo: Darrell Wong/The Surfer’s Journal

”Joe is a master craftsman and a master designer. When we ask him to design a certain type of canoe, we know we won’t get it quickly. He’s slow, in fact. He takes his time. But we do know one thing: The end result will be a very hot boat,” recalled Hank Lass, owner of a Honolulu firm called The Fiberglass Shop, the following year in an L.A. Times article. ”The Molokai-to-Oahu race used to be just a few boats, and the guys in them would race the 42.5-mile course without having done any training at all. Today, everybody takes it more seriously. The paddlers are in shape and most are well-conditioned athletes. Now, we’re seeing just how fast our boats can go. In 1952, there were three boats in the race. The winning time was 8 hours 55 minutes. The winning boat in the race last October made it in 5:12.”

In 2005, at the Outrigger Canoe Club annual meeting, Quigg was elected to the distinguished Winged ”O” for his dedication to the club’s athletic program. He joined the OCC on May 21, 1954. Quigg with some of his boards in his Newport Beach Surf Shop. Photo: LeRoy Grannis Collection

Quigg · On Working in the Surfboard Business

”In 1959, Hobie Alter called me from Dana Point. He said he had 500 orders for boards and two employees. He liked the way I shaped boards, so I went back to work for him for a while. Then I wound up running a surfboard shop of my own (Joe Quigg Surfboards), on 31st Street in Newport Beach, from late 1959 to 1970. In those years, what I really wanted to do was design and build small sailboats. But the surfboard business was so good, people wouldn’t let me get out of surfboards.” Quigg · His Newport Beach Surf Shop
‘I rented my shop in Newport on 31st Street in about 1959. It was going to be a boat shop. I was doing shape jobs for Hobie then. I’d bring blanks up there and shape them, but it really didn’t become a surf shop until 1960 or ’61.” ‘I had a style of bodysurfing the Wedge, where I’d drop in on my side, like it was a rail, and curve it to be the right shape to go up and down the wave. Most people plane with one arm back, one arm over, but I rode on my shoulder, like it was a rail. Rails are my big thing.” Photo: Bev Morgan Collection