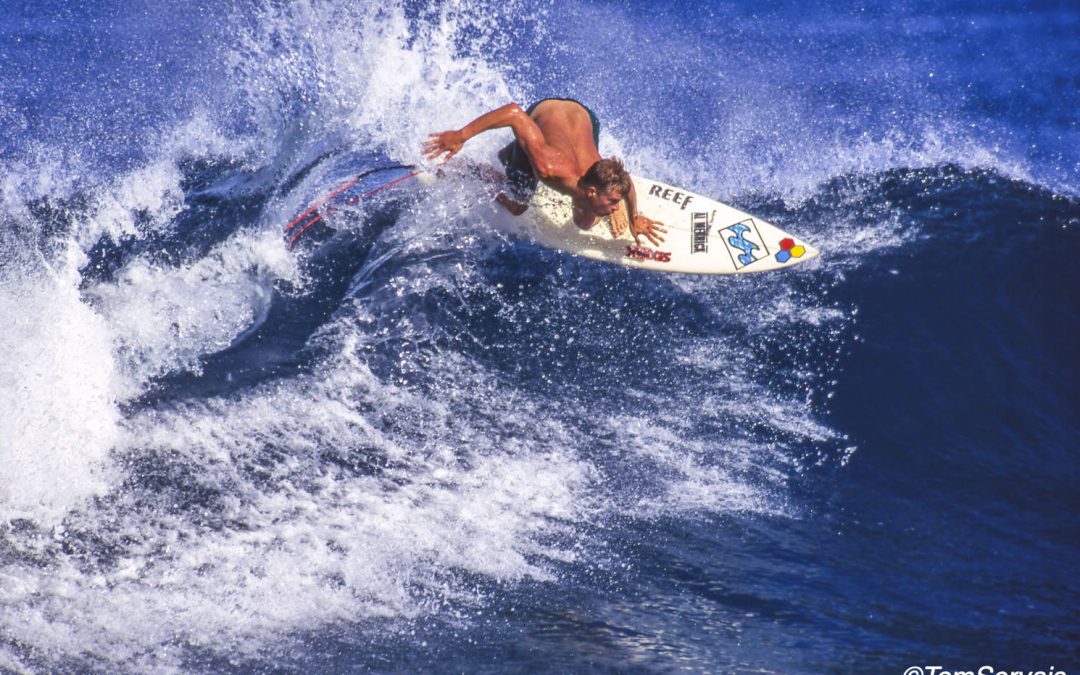 From about ’90 through ’96 the Bud Pro Tour was beamed into hundreds of thousands of houses throughout the U.S., and at one point, over 80 countries around the world. The list of Bud Pro Tour graduates includes Kelly Slater, Rob Machado, Taylor Knox, Pat O’Connell, the Malloys, Shane Beschen, Dino Andino, Archy, Richie Collins, and, of course, Chris Brown.

The surf industry was in the midst of a boom cycle, the Bud Pro Tour had the power of TV behind it (there were pre-Internet days, after all), and all of a sudden, surfers like Slater and Brown became household names. With his piercing good looks and abundance of natural talent, Slater was the obvious golden child. Brown, whose family was hardcore Christian, was one of his only true rivals that was capable of handing him defeat on the reg.

It all came to a head at the 1990 Body Glove Surfbout at Lowers. Slater had famously inked a record-breaking, million-dollar deal with Quiksilver on the cobblestones and the movie “Black & White” was in production. Slater’s sleepy remark, “It’s the morning of the final,” would soon be imitated by thousands of groms and find its own special place in surfing’s garbled lexicon.

In said final, Slater faced Brown, who had been ripping Lowers all week. Lightning fast and snappy, his Rincon upbringing and all the time in the water watching Tom Curren had blessed him with a rail game unlike most other “kids” on the Bud Pro Tour. Try as he might, tall and lanky Brown, who’d won the World Amateur Surfing Championship in ’88, didn’t have an answer for Slater’s barrage.

“I think he’s a future world champion,” Brown told the L.A. Times after the final.

Two years later Slater won his first title. For Brown, much like Curren, the importance of the contest scene waned. In ’93 he had his best year on the Championship Tour, finishing 23rd in the world. The following year he won the Bud Pro Tour. In ’95 he walked away from it all.

“I think that event was maybe a little bit of a heartbreaker for him and a huge propellant for my career and I have wondered over the years what would have happened had Chris won that contest and I got second?” Slater pondered in an interview years later. “Would that have changed our lives or our careers in any way?”

The answer is, probably not. Slater was far too competitive and cashed up at that time in his life to let a runner-up finish slow him down. He was destined to be the G.O.A.T.

Brown was always a California kid at heart. He loved the cold water and the myriad of opportunities a good west swell provided. He had dedicated himself to learning when and where to be somewhere when the conditions dictated. And after he walked away from competitive surfing, he spent the rest of his life enjoying all that the Golden State has to offer.

Brown grew to become comfortable in the big, heavy swells of Central and Northern California. On December 19, 1994, he sat in the channel and watched Jay Moriarity go down in his infamous iron cross wipe-out on. One of the most recognizable beatings in surf history, the photo eventually landed on the cover of Surfer magazine and launched the legend of Moriarity (Brown’s the surfer in the foreground of the photo). For his2 part in that session he paddled straight back to shore.

But true to his character, Brown was back for the next session. Slowly but surely, he built his confidence at Mavs until, by the turn of the century, he was one of the craziest surfers in the Half Moon Bay asylum.

Throughout the remainder of his life, Brown continued to chase waves up and down California. He always showed up with a big, old smile and good vibes. He was the rare breed of surfer in which everyone was always genuinely happy to share the lineup with him.

“Browny’s positive, infectious energy made every session out there more fun. He had a huge heart, a bigger smile and I will always be grateful for our time in the water together,” remembered Evan Slater, former editor of Surfing magazine, Maverick’s charger and current boss man at Hurley.

Because surf money never lasts (unless you’re Slater), as he got older Brown started working as an urchin diver in the Channel Islands to support his wife and daughter. It’s not easy work, but for the salty dogs that ply their trade at the bottom of the Pacific, it’s an opportunity to keep the gills wet. Brown embraced the life of an urchin diver much like he embraced his life as a surfer—with enthusiasm and good cheer.

A few weeks before Brown passed, he had breakfast with old friend Anthony Ruffo up in Santa Cruz. Both are former Cold Water Classic winners and both have wrestled with life’s demons and come out the other side better men. For Ruffo it was the chance to catch up with an old friend, but he never expected it would be the last time he would see him.

“The water was really clean and clear, and I was in a place where there are urchins everywhere. As I was harvesting, all the sudden it went dark around me, I turned and looked at my side, and there was this huge Great White cruising at stealth speed right next to me. And as it made its turn he tilted and was looking right at my eyes with his one eye. And I could see him saying, ‘You’re cool? I’m cool. If you’re cool, I’m cool?’ The shark circled around and just slowly cruised away.”

That’s a pretty much how Brown interacted with his world. Be it sharks, jersey-clad competitors, or an old friend in the lineup at Rincon, Brown was always cool. There was no pretense or ego with Brown, just a big smile, hearty laugh and constant sense of stoke. He was a surfer’s surfer through and through. He will be missed.  – Jake Howard