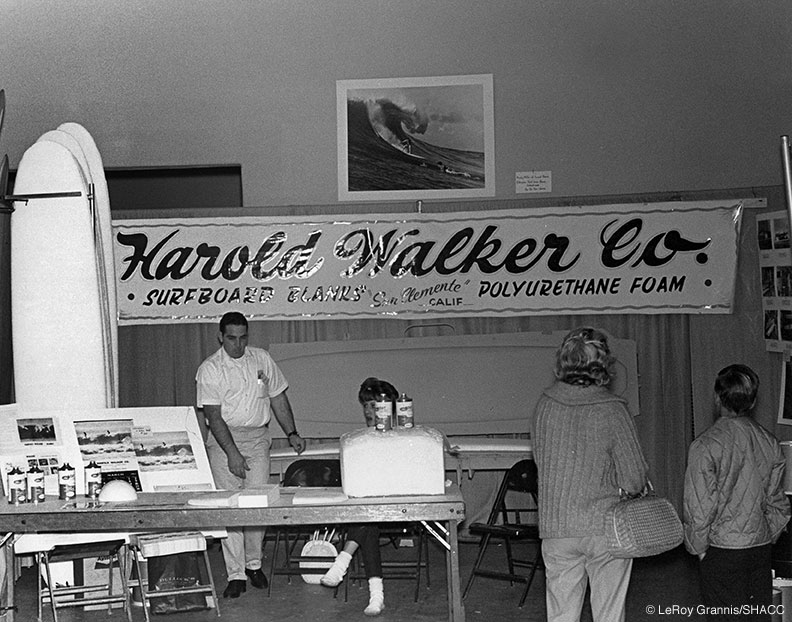 With the passing of Harold Walker, the surf world mourns the loss of another brilliant pioneer. One of the integral players in the early advancement and acceptance of Polyurethane surfboard blanks, his contributions to the sport of surfing and craft of surfboard building can’t be understated.

Going back to the 1950s, as Hobie Alter and Gordon “Grubby” Clark began to perfect their initial surfboard foam it was Walker that provided them with the most consistent competition. Devising his own formulas and techniques for blowing foam, Walker was able to go toe to toe with Clark Foam, providing blanks and servicing surfboard shapers, including Hap Jacobs in Hermosa Beach, with materials.

To say competing with Clark Foam was a challenge would be an understatement. Clark was notorious for not selling to anyone that bought foam from somebody else, especially Walker, and by 1973, Walker was forced to walk away from his business because of dwindling sales.

Eventually, Walker found his way back into the surfboard blank business, starting Walker Foam back up in 1990. Proving that most things in this world come out in the wash, on Dec. 7, 2005, Clark abruptly shuttered the Clark Foam factory in Orange County. This should have been a huge windfall for Walker Foam, but the business wasn’t set up to handle the over-night demand for blanks that emerged in the wake of Clark’s closure.

“I could sell thousands of blanks right now if we had them,” Walker told the L.A. Times in December 2005. “It’s surreal.”

“Before long they were rockin’ and rollin’ in orders and even though it was impossible to keep up, it was a much better situation to be in than not having any orders at all,” recalled Corky Carroll in a column for the Orange County Register. “Since then, things have levelled off and Harold Walker has had a nice run as a leading surfboard foam producer. One of the true ‘survivors’ of the industry.”

Unfortunately, Walker was unable to hang on and ended up permanently closing his factory in Wilmington in 2007.

Walker was inducted into the Surfboard Builders Hall of Fame in Huntington Beach in October 2018. He will be greatly missed.