The Struggles Of Being A Surf Photographer Today 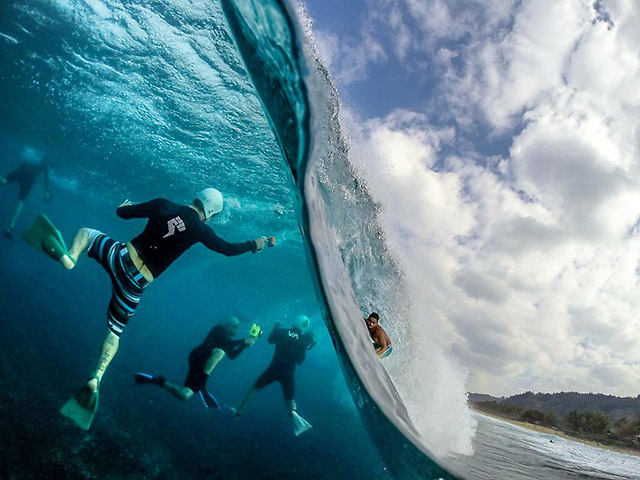 When surf magazines died the high art of surf photography almost did too. But try as it might, even the super saturation of subpar imagery on social media couldn’t kill the stubborn drive of those intrepid lensmen around the world.

The “golden age” of the surf photographer may have been right before the digital revolution in the early 2000s. Magazines were printing the thickest issues they’d ever made, brands were flush with cash, photographers were slanging shots for $10k a pop, and it still meant something to grace the cover of Surfer Magazine.

“It’s not what it once was, it’s changed, that’s for sure,” says Brian Bielmann, who first started shooting photos on the North Shore in the late ‘70s. “It’s never been easy, and nobody ever got rich off of it, but you used to tell people you were a surf photographer and they were impressed…now they just kind of look at you.”

Retainered photographers were not only paid by the mags and brands, but they were also provided with film and travel budgets. That gave them a distinct leg up on aspirational amateur photographers because they were able to shoot more, work with A-grade talent in A-grade locations, and weren’t saddled with the expenses of airline tickets and film processing. There’s always been a freelance hustle aspect to the game, but the mags and brands provided the backbone for a “career path.” Writers, like myself, would ferry film back from the frontlines to the mag office, where slides were horded and coveted, only to be deployed when most effective. There was no Instagram, so what you saw in the mags was what you got.

“It’s unfortunate, but strictly being a ‘surf photographer’ is no longer a career path,” says Jimmy Wilson. “It’s always been niche with a limited amount of people making a real living, but now it’s basically crickets out there. There’s a few still kicking, but for the most part, I see people using it as a side hustle, and not their bread and butter.”

And because even a blind squirrel finds a nut every once in awhile, as digital cameras and iPhone took over hobbyist photographers were able to fire off thousands of frames and flood the market. In 2008, the global financial crisis took the piss out of the surf industry. Marketing and advertising budgets were slashed. Then print died. Then social media took over.

So, how for fuck’s sake is a surf photographer supposed to make it today when “nobody pays for photos” and reposting is the new business standard?

“Hustle. It’s a constant hustle,” says Laserwolf. “But there’s still opportunities out there if you can hustle.”

“Bottom line, if you have a true passion for shooting and you want to travel the world living some crazy experiences, you should fucking go for it,” affirms Jimmy Wilson.

Both photographers got their start in the Sunshine State and throughout their respective careers have risen to international prominence. Laserwolf’s renowned for swimming deep in the pit at Pipe and hoisting his fisheye. Wilson’s worked with every pro you can think of and is a true road warrior. Both have had to adapt and make concessions to keep scratching the creative itch.

“The biggest evolution to make money has been from the Vlog world,” Wilson says. “There are plenty of jobs out there by pairing up with a popular surfer to document and edit a video series on YouTube, or shoot photos for their personal Instagram, including sponsored posts. The most talented surf photographers have always moved on to bigger and better money jobs in other industries. You see that still happening today.”

Both Wilson and Laserwolf have also found success providing marquee brands with content to keep their social media feeds well stocked and their catalogs looking sharp. Wilson has a great working relationship with Vans, while Laserwolf is currently working with OluKai and Katin.

“It’s all about relationships and being able to solve multiple problems for a brand,” says Laserwolf. “You can complain about how it used to be, or you can figure out a positive solution where everyone wins. For example, what I’m doing with Katin, I’m handling the team stuff, while also shooting photos for their social channel. They’re one of the original surf brands and it’s really fun to be able to be diversified like that and not just be the photographer.”

As technology hurtles ever forward, the biggest cost for photographers continues to be keeping up with equipment. Wilson shoots with a Canon 1DX Mark II body, which he paid $5,500 for three years ago. He’s dropped another $5,000 on CMT Water housings. Add to that the latest laptop computer, hard drives and editing software, which runs about $4,000. That puts you about $15,000 in the hole before you’ve even bought a lens or snapped a frame.

“Another huge cost, depending on the photographer, is just getting to a destination to shoot,” Wilson says. “Not a ton of companies throwing down for travel, so I see a number of self-motivated photographers paying their way, to hopefully make money back on selling images or prints.”

“I’ve been doing this for awhile and I’m looking at how to leverage my archive and experience,” says Bielmann. “I’ve got some classic prints that are good sellers, and lately I’ve been looking into doing more slideshows and presentations.”

“I wouldn’t even consider myself a surf photographer,” Wilson admits. “The majority of my income comes from producing social media for @vanssurf. Shooting had little, or maybe nothing, to do with why I was even hired. I’m under the impression it was more of my editor background from the SURFING Magazine days. Shooting for Vans came naturally later on, because I needed content to run on a daily basis and became proactive about capturing that. Now it’s kind of open to whatever they need from me. Like the content version of a Swiss army knife, I will interview Nathan Fletcher, shoot the new UltraRange, cover a Vans Duct Tape, construct a plan for a social media campaign, or set up a shoot somewhere. That goes along with my daily job of organizing, writing copy, and posting everything.”

Laserwolf is in a similar situation with the brands he works with.

“For OluKai it started with a friend referring me to them, the relationship grew from there, and it’s grown from providing images when they need it to having trust in me to do their social media posting,” he says. “And that’s really more of a customer service job than a photography job. As the face and voice of the brand, you’re communicating directly with customers every day, and you have to be able to provide them with the service and solutions in a diplomatic, artful way.”

At the end of the day, if one wants to make a career out of shooting surf photos it’s still possible. The realities are different, and the business requires being more diversified and flexible to opportunities, but there will be always be a place in surfing’s culture for epic surf photos. All those iconic moments over the years are what continue to propel us forward.

“The main takeaway for any young kids coming up should be: you can still make money shooting surfing,” Wilson testifies. “It just looks different than it used to. Be open to everything and find your own way. There’s a lot of discouragement and negativity out there from people who are terrified of the next kid coming up and stealing their job. They’ll downplay how much money they make and ramble on about how tough it is to survive. I’ve never thought of myself as one of the most talented. I have confidence I can crush any job I’m offered, but much of that is based off the fact that I’m prepared, and I commit to working as hard, or harder, than anyone else.”