The Stylist, the Savage, the Iceman and the Raging Bull 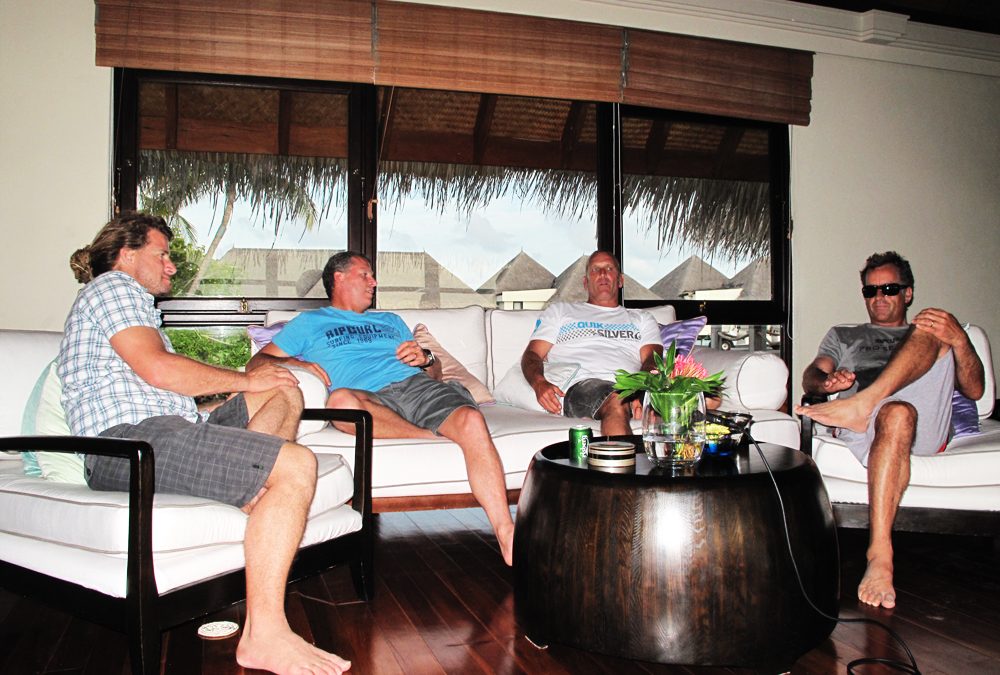 Pottz: The trials were quite prestigious. The Bells trials were gnarly, you had the top 16 guys, but then you had so many good surfers that were traveling the world chasing that top 16 spot, and all of the locals who were specialized at that break. Was it still like that when you came on Tom?

Pottz: You went through the trials and then won the world title, didn’t you? [laughs]

Curren: Yeah, but I had a few wildcards.

Occy: Cronulla, remember that one? On that six-channel board?

Curren: Was that it? Wait, that’s when the season used to finish in Australia…Burleigh, Bells, and then the Coke. When I started it was ’83 when I surfed the Op Pro, my first ASP event, in Huntington. Then went to Japan and won that. And then, I think, was Hawaii on that year?

Pottz: Yeah, right, wasn’t there some kind of boycott. Or was that ’82? It was the IPS/ASP bullshit, remember that?

Occy: Right, that was when Dane [Kealoha] got kicked off tour. You could surf in the events, but if you did you had to pay this massive fine.

Pottz: And Dane didn’t want to pay it out of principle, which is an utter shame. Dooma, was it trials with as well when you started?

Hardman: Yep, trials as well. But Occy and I we started competing at the school boy level. Then once we got into the Under 16s Occ left school, we were sort of neck and neck at the time, probably best juniors in Australia at that point, and my father made me stay at home and finish school. Occ went on tour, was in the Pipe Masters, winning events, and I was just going, “This is not fair.” But you know, it’s easy to look back on it now, but I’m glad that I took the path that I did. I did the amateur career for awhile, and finished school and went on tour. I did the trials for a year.

Pottz: You qualified after your first year?

Pottz: So we all qualified in our first year?

Occy: Yeah, I think I just made it too. I just made the Top 16. I remember when I first went on tour it was like jumping straight into the deep end. I went to Durban with Wes Laine, which were good guys, and then we went to J-Bay — the Country Fair — and it was just pumping. It was like a C-grade contest at the time.

Curren: You won that.

Occy: Ummm, I did, yeah. It was like as soon as they pushed that contest buzzer it pumped. I think I had Hans Hedaman in the final, but that afternoon me and Tommy were doing these big crossovers afternoon, it was like eight feet. It was like we’d just drop in on each other and do crossovers the whole way. Crossovers.

Curren: I wasn’t there, but I remember that. There was a clip of it and I kept rewinding there were like two or three waves, it was the final, and it wasn’t very big, but there was this one part where you did a floater and the turns were just so on edge, under the hook. So, just, “arrrrrrgggghhh.”

Pottz: That wave was made for you, Occ.

Occy: That and Bells, I just love ’em.

Pottz: I reckon it’s a better backhand wave than a forehand wave?

Hardman: I hated it on my backhand.

Pottz: But on your backhand you can get that extra little push out of it and into the top, whereas on your forehand you can’t quite go at it as hard, I guess.

Hardman: Depends on how the wind is. If it has that devil wind it’s a terrible backside wave.

Pottz: But god, remember back then we had like 28 events on tour. You really had to chase your tail. There were instances where you’d have to go to the same country three different times of the year. And then what, they chose 75 percent of your best results. It was pretty special making the top 16, because everybody knew who the top 16 were.

Hardman: It was really prestigious.

Pottz: It’s like you were a household names, and then it lost a bit of oomph when it went to the Top 44.

Occy: I keep on saying I’d rather it be like that again, you know, it’d be so good for the sport. Because in Hawaii they already get all their guys in Pipe, and then at places like Burrleigh or Bells, there’s at least 10 or 15 specialists. Teahupoo, the Goldy, there’s always guys that can rip that can beat anyone.

Hardman: I still think it’s the fairest system of surfing we’ve had. Because anybody that is good enough can come from the trials and win an event.

Pottz: I made the finals of an event when I was 15, you don’t hear of that happening anymore…not unless they get a wildcard. And even when they get a wildcard they have to go up against Kelly or something. It’s almost impossible for that stuff to kind of happen today.

How award of each other were you coming up?

Occy: Yeah, well, you know, you hear about these things. Damien and I competed against each other in the junior ranks, so like school mates, so we surfed against. We all knew about it. But I heard of Tom, and Tom came out and stayed with Jim Banks his first trip, didn’t you Tom?

Pottz: We were all well aware of what was going on. Occy coming through. And here was Tom, this guy that was supposed to smash everyone. I remember going out to California with the South African team when I was 14 and that was the first time we clashed, Huntington Beach. Everybody was telling us how this guy was going to smoke all of us, and we were like, “Oh no!” So yeah, we were definitely well aware of what was coming.

Occy: First time I saw Tom I was at Cronulla hill. I knew Tommy was in town, and I walked over the hill it was like six- to eight-foot plus, and nobody was really out except Tommy and I got to watch him surfing. It was amazing.

Hardman: Even though you didn’t have the digital age of the internet, you heard about people pretty quick. Like I heard of Pottz when he was 15. He did well at a contest and it was in the papers in Australia. I knew straight away there was some 15-year-old surfer from South Africa coming.

Curren: I was fortunate enough to be there, and so I saw the whole thing. It was amazing. Me and my friend were blown away. 1981. The waves were good and it was just so amazing to watch it all. We were like, “Wow, who’s this 15-year-old kid?”

Pottz: I pretty much turned pro so I didn’t have to join the army and get the hell out of South Africa.