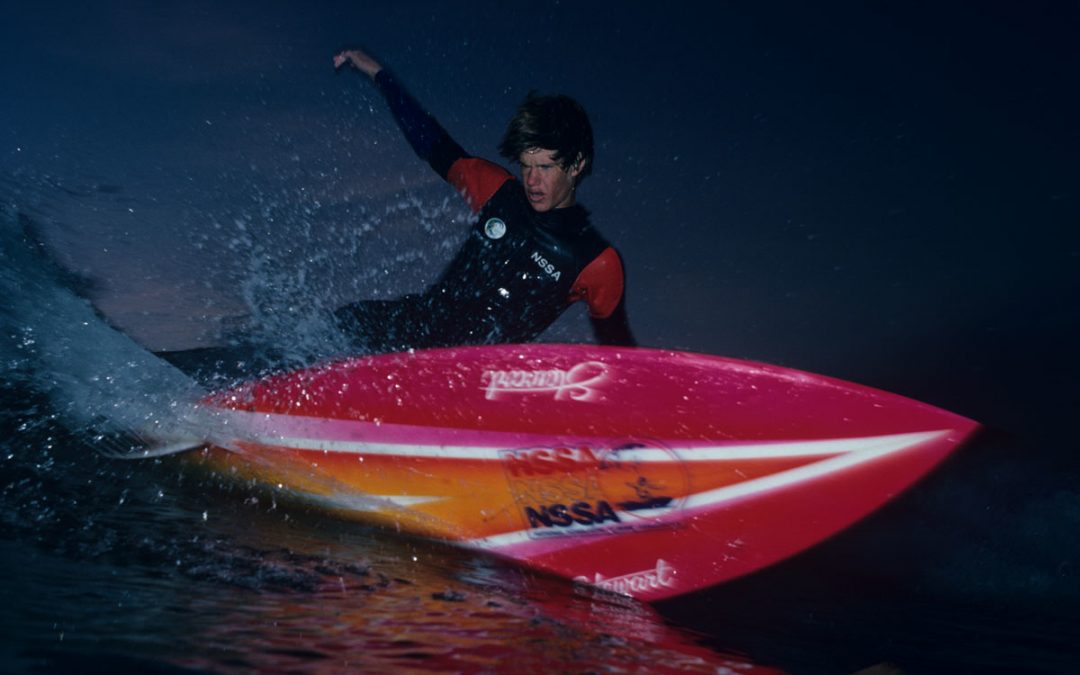 As Told By Mike Parsons

We were as polar opposite as you could ever imagine when we were on tour together. I was the guy that he made fun of for going to bed at night and trying to win heats, and he was the guy wearing leather jackets and riding motorcycles all over Europe, the “Life’s a Beach” guy. We formally met each other through Taylor Knox, which was kind of funny because we were both friends with Taylor, but Brad and I really couldn’t stand each other until we were sort of forced to start surfing together. We’d all go down to Todos and that’s when the wall started to come down. It’s funny, all those years of battling each other and being archrivals, in the end those are the people you wind up respecting the most.

At the time we started to become friends I was getting into tow surfing because I saw the stuff of Laird at Jaws. So we got a ski and started tow surfing in the late ’90s. Brad was the perfect guy because he wasn’t busy on tour and he was interested in big waves. We started towing at Todos a lot. In 2001 we ended up at Cortes with Peter and Skinny and had that first epic swell there.

I clearly remember one of the biggest days we ever surfed Jaws. I wanted to go left on one. We’d been talking about how you have to tow it, how you really have to follow close behind on the ski because if you don’t pick your partner up when he kicks out he’s in jeopardy of getting caught inside, closed out on and washed into the rocks. It was huge and really windy. It was the same day Shane Dorian won the XXL Awards going left out there. Ross Clarke-Jones had just ridden a wave and there was this jet boat in the lineup. Brad was trying to get me this left, it was definitely the biggest left I’ve ever dropped into in my life, and I had to kind of turn to get out of the way of this jet boat. Brad Gerlach in all his colorful glory.

I rode it all the way, and I was just thinking, “I can’t wait to tell Brad.” But when I kicked out he wasn’t there. He was like a football field away, racing at me with this look on his face like, “Oh, sorry man.” This huge set was coming and I just put my head down. I got sucked over the falls, caught inside, and he had to wait outside through it all thinking, “Oh, I just killed my buddy.”

So I was getting blasted right next to the rock, hit the rocks a couple of times, and then this local guy charged in on a ski and got me. And I remember thinking the whole time that if I survived I was going to kill Brad. I made it back out eventually, and it was definitely the most pissed off I’ve ever been at Brad. I called him every possible thing I could think of when he pulled up on his ski. He knew he couldn’t say anything. After awhile of verbally abusing him he started stabbing back about how I couldn’t find him on a right earlier that day.

After he calmed down and I calmed down, we were on the plane that night and I don’t think I’ve ever laughed that hard in my life. We thought it was hilarious how at one moment you can be that pissed off at each other, but you get over it. We laughed for five hours straight on the flight home. The next morning we got up and went to Todos and got great waves. But I’ll never forget how pissed off we were. Obviously he tried his hardest to get to me and I tried my hardest to find him on the right. In the end it’s absolutely classic stuff that thankfully you can laugh about later.