The Road To Cape St. Francis 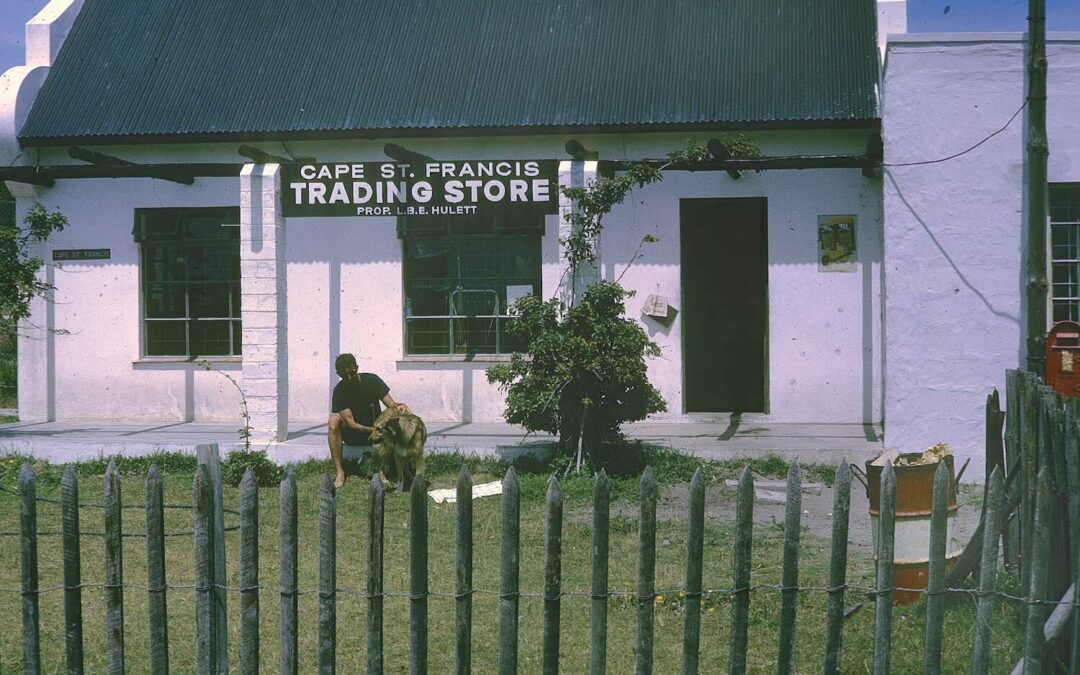 John [Whitmore] said that he’d get me a ride up the coast, that he knew a couple of salesmen who had to go up there, that I should just sit tight and they’ll get me a ride eventually. So I did, and he did get me a ride, and I left a couple months later with this guy. I forget what he was selling, but he was going to East London. John said, “When you go with this guy, he’s not in a hurry, and have him stop. I think there are a couple of places with some neat waves. One of them is called Cape St. Francis. You wanna stop there and check it out.” He said that there were also a lot of other places, that the road goes right along the coast. So away we went.

To get out onto this road, there’s a big bay, so the peninsula of Cape Town hangs way down, and we drove all around that. On the other side, the east side of the cape, is the Indian Ocean, and that’s where the little town of Muizenberg is. It’s a white sandy beach and kind of a big bay, with neat waves, kind of like Texas. You can walk out half a mile and you’re only chest deep, and there’s just waves all over the place. Not great for surfing, but great for bodysurfing. There are waves everywhere. There weren’t many people there, but we went over there and played in the water a lot because it was so much warmer. Once you started on this road going up the coast, you had to drive around this bay, and then you came back out right on the coast, and that’s where Nizner is—it’s just a spectacular coastline. So we’re driving right along the coast, and I could see the beach.  We’d stop and I’d go down, sit on the beach, wearing my M. Nii trunks, jump in the water. It was just so neat, thre was nobody there. It was pristine. It was like you’re discovering Laguna and Dana Point in 1900. I had such an emotional sense about the whole thing. And I still do to this day.

There wasn’t much in Cape St. Francis when Dick Metz first landed there in 1959, but that’s changed since the location was revealed in Bruce Brown’s seminal “The Endless Summer.” Photo: Metz Collection

So we worked our way up the coast, and we did get to Cape St. Francis. We drove out there and met the guy who owned a bunch of property and had a general store there. He had a paddleboard that a guy had made for him in Durban. I surfed on that, at JBay [Jeffreys Bay]. (You’ve probably seen pictures of Bruce Brown surfing there.)

Cape St. Francis sticks out the farthest, and it’s pretty windy out there, and there are big waves. Then it wraps into a huge big bay called JBay. There are different breaks, and all along that big bay, inside, there are different points, and every point causes a break. Then it kinda peters out, going maybe another mile or so. Then there’s another point, or rocky reef. There are all these different surf spots, and none of them had names when I was there. But when Bruce got there half a decade later he named one of them Bruce’s Beauties.

I surfed all along there and it was just spectacular, though windy out on the point—and big.

I spent five or six days at Cape St. Francis—there was no hotel, no town, not much of anything, but there was a general store. I have a picture of me sitting in front of it, petting the owner’s dog. He gave me a room in the back, and I just stayed there and played on the beach and surfed.

I discovered that Cape St. Francis is the farthest point out, and it’s a big bay and gets really windy. At around noon, it would start blowing, but the inside was protected because it was in the lee. Cape St. Francis had the biggest waves, but it got the windiest the earliest. So we would work our way into what’s now called Jeffreys Bay, and there’s ten different breaks all along there. The farther inside the bay you go, the smaller it gets. There are some great point breaks coming off that point, Cape St. Francis, and wrapping around. It became obvious to me after walking it that it must’ve been five miles, because it curves way in, through all these sandy beaches and little rocky points—that the breaks, at least some of them, kinda ran into one another. You could take off on one and get down toward the end of it, where you’d normally kick out or go in on the white water, but then another point would be beginning its break. They didn’t have names, and there was nobody there surfing, and I didn’t know much about it. Whitmore had told me that all along that coast there were good waves, so I called it Cape St. Francis. I have pictures of it during that trip. And, of course, I told Bruce Brown about it, and he named one of them Bruce’s Beauties. They all have names now. But when I was there, I was the only one surfing those unnamed breaks.